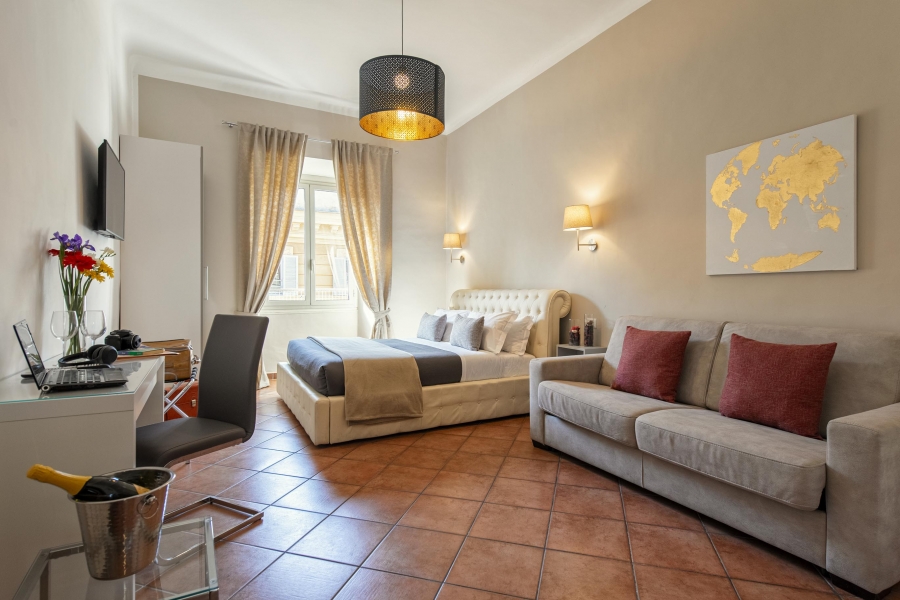 Apartment
Spacious apartment with refined furniture, it can host up to 10 guests. The apartment is placed in the upscale Sallustiano district, in the vicinity of Villa Borghese and easily accessible from Termini Railway Station. The entire historic centre of Rome and its most popular and stunning monuments are at walking reach.

Forget the car and walk through an open-air museum dating back more than two and a half thousand years: the amazing city of Rome!

Spacious apartment with refined furniture, it can host up to 10 guests. The apartment is placed in the upscale Sallustiano district, in the vicinity of Villa Borghese and easily accessible from Termini Railway Station. The entire historic centre of Rome and its most popular and stunning monuments are at walking reach.

Newly restored, the apartment is placed at the fifth and last floor of an historic building in Rome, one of the reason why it is particularly bright and peaceful, spacious, located in an excellent position and quiet. Here, you will find the ideal atmosphere to spend your days in the eternal city, either with your family or your friends, one of the features that makes the plus of this building.

The apartment consists of 2 wide rooms, each with a double bed and a comfortable double sofa bed, a living/dining room with another sofa bed, with an overall capacity of 10 people, 2 bathrooms with a shower and a full kitchen with utensils and accessories.

Here you can literally forget the car and walk through the city of Rome, an open-air museum. Everything is at walking reach: the amazing bars, restaurants and museums; this will help you to turn your journey into an unforgettable experience!

Take a look to pictures broken down into type or category 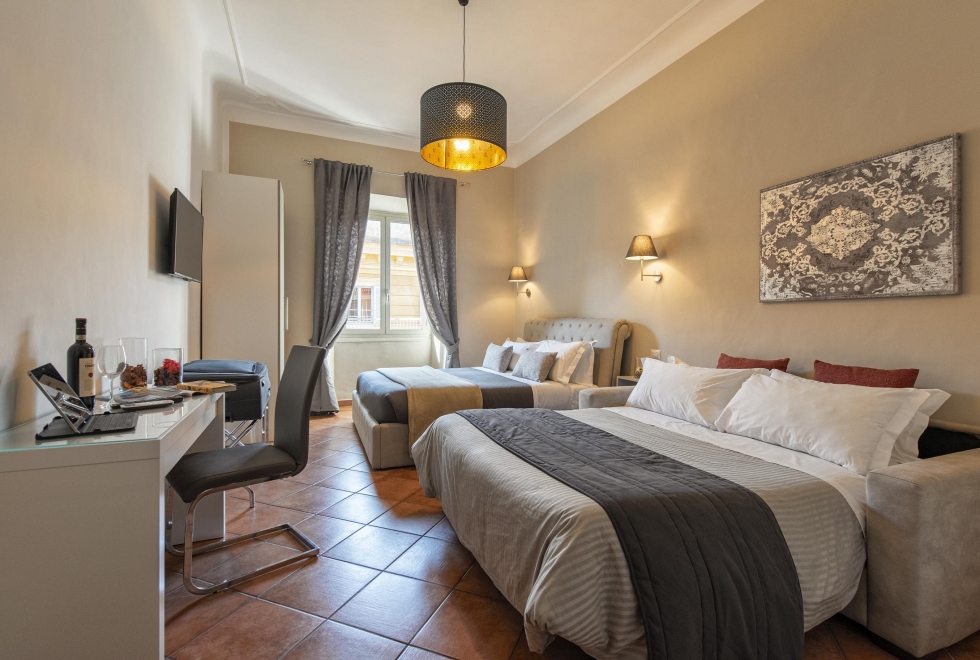 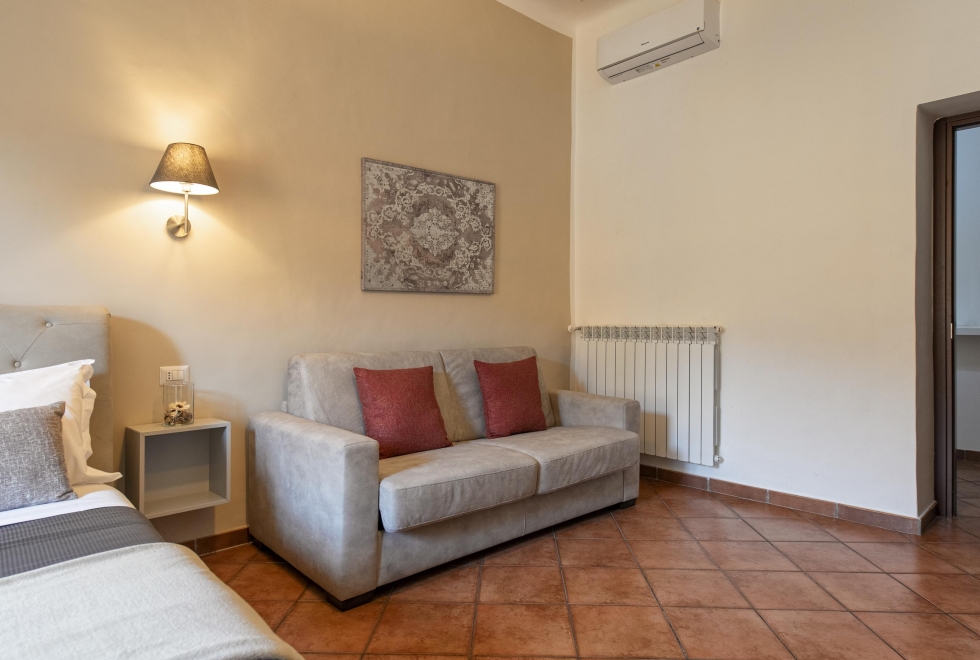 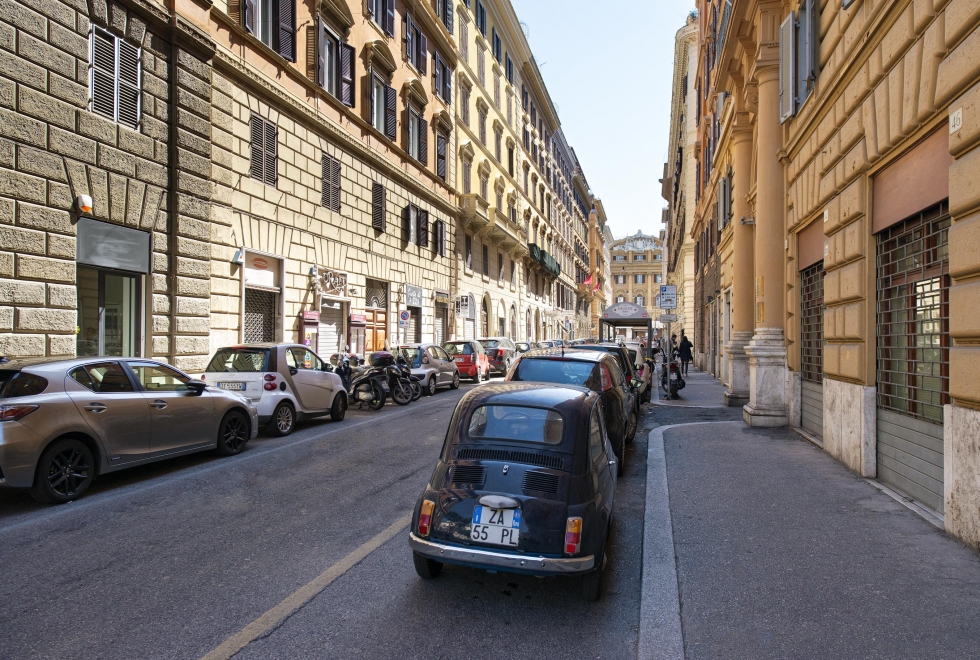 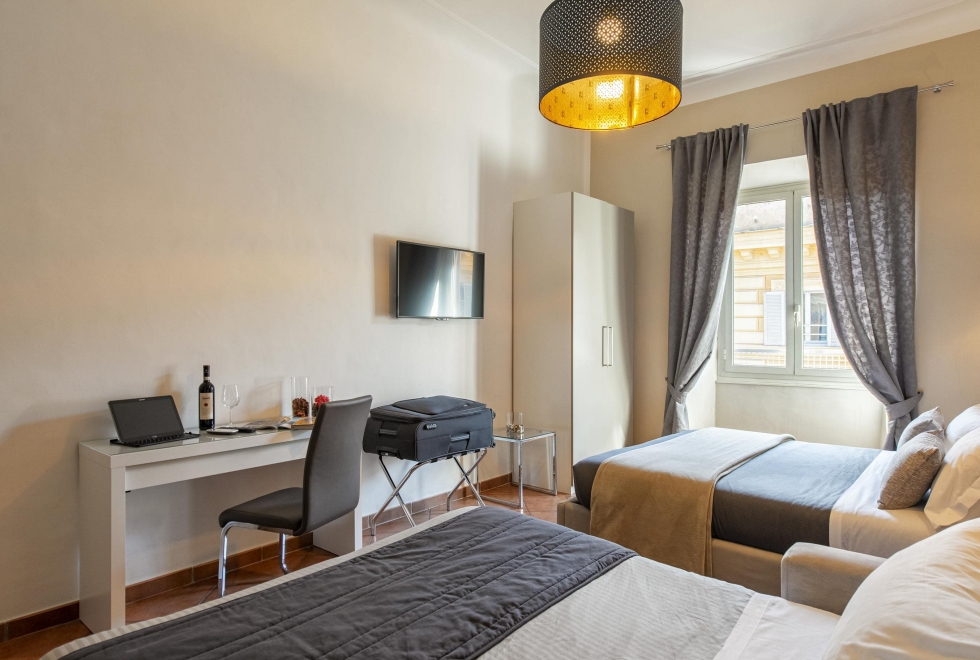 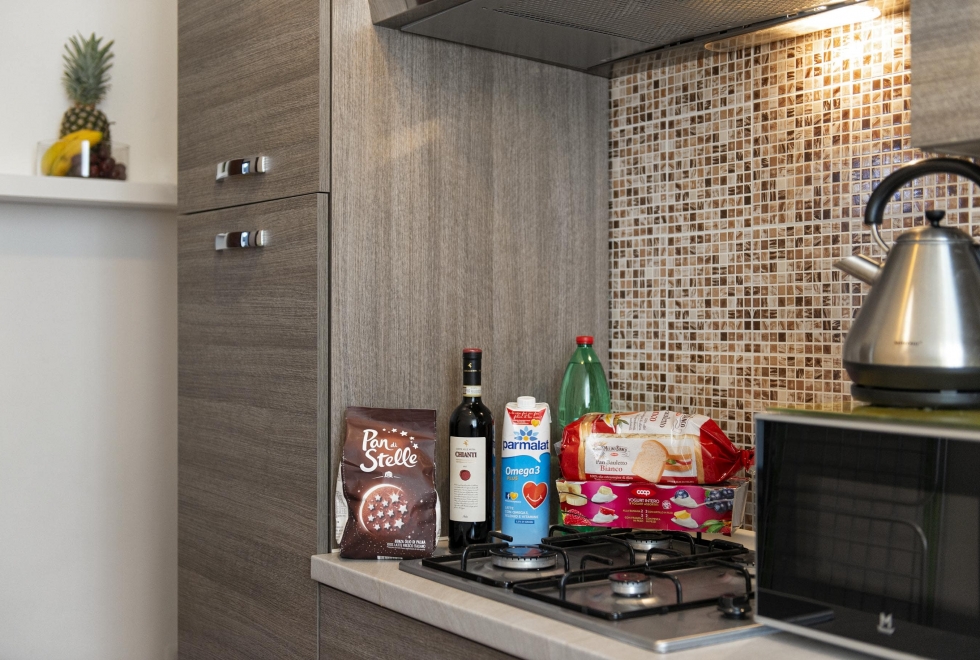 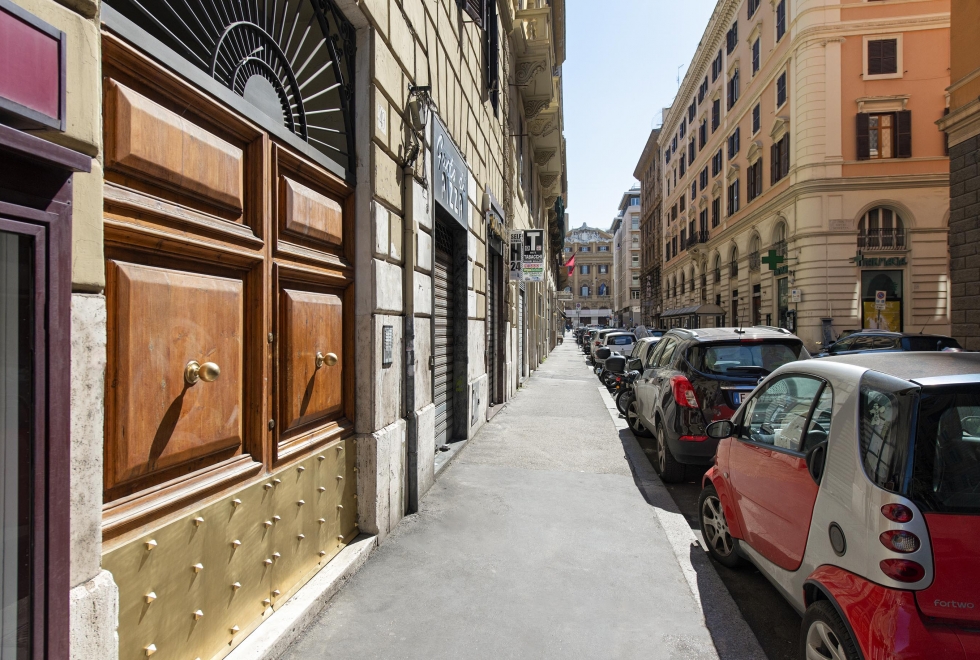 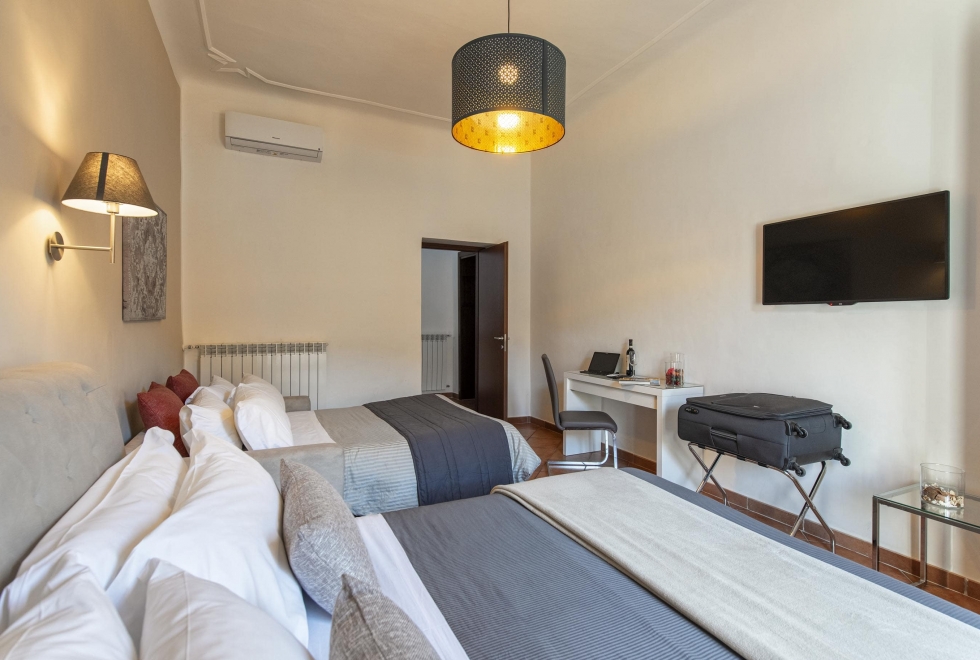 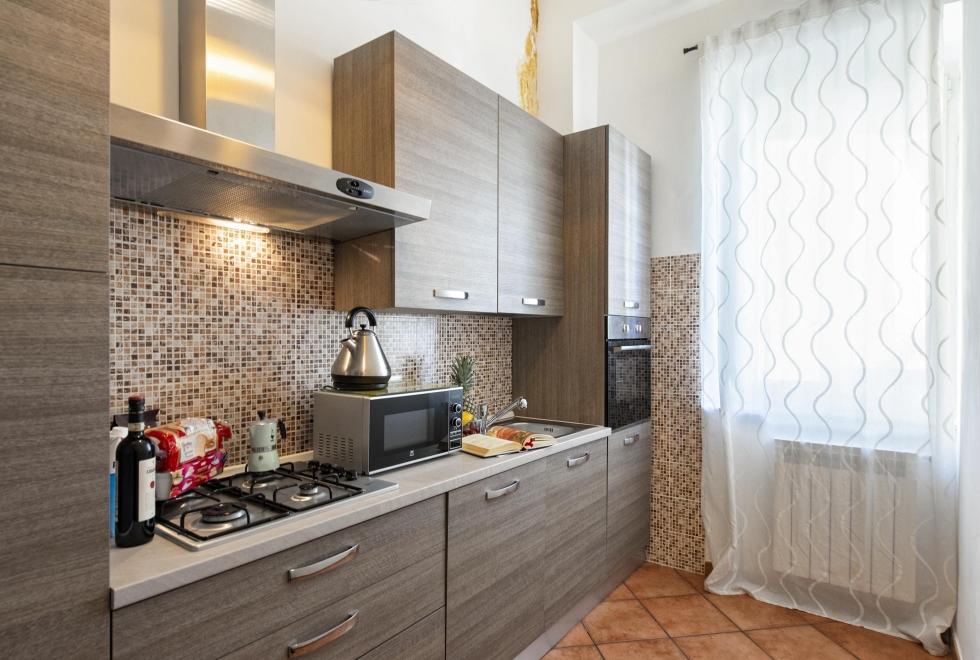 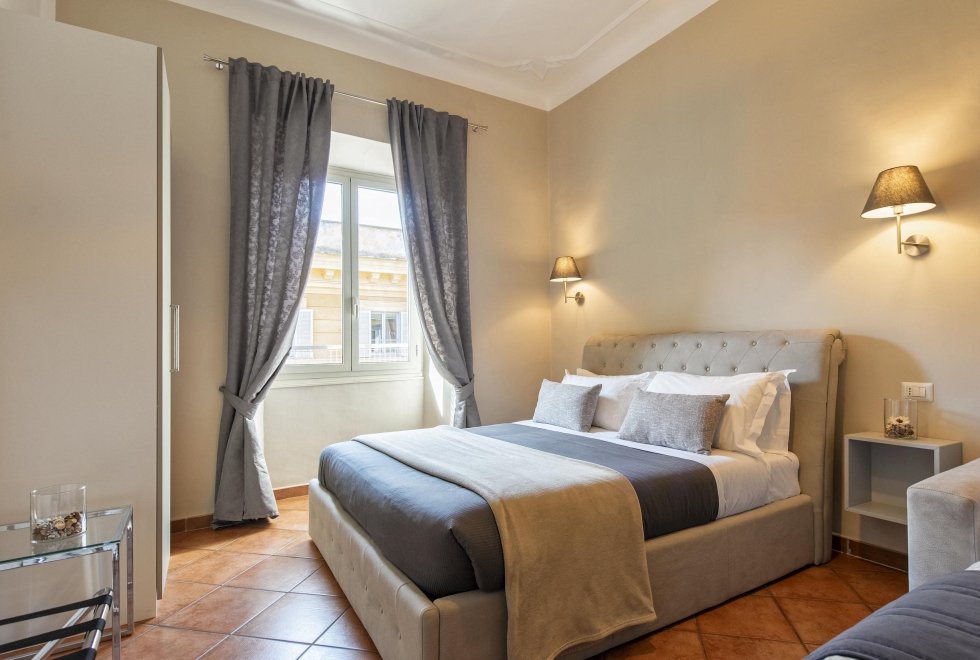 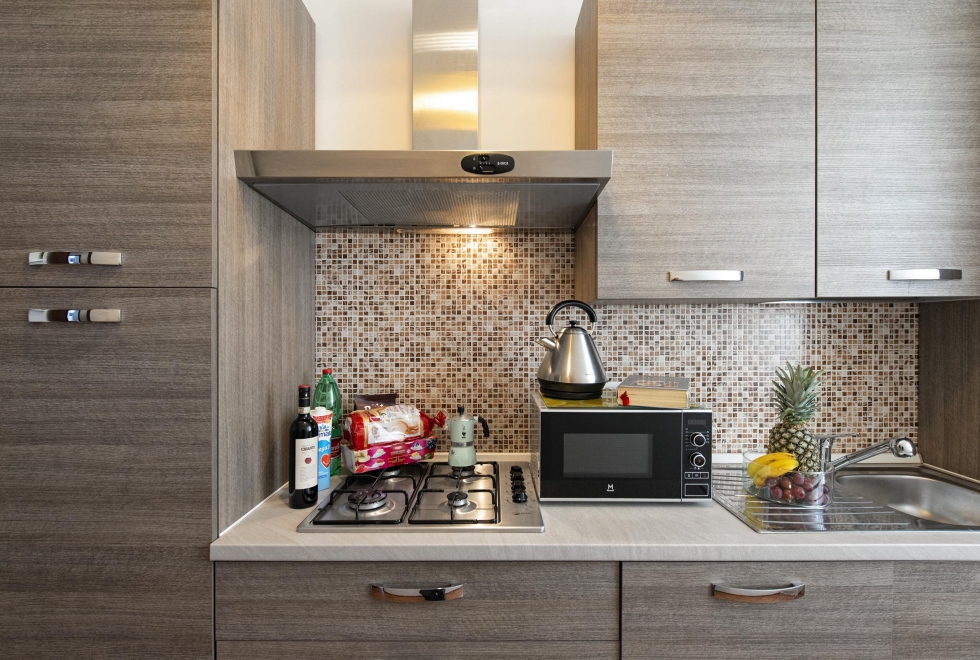 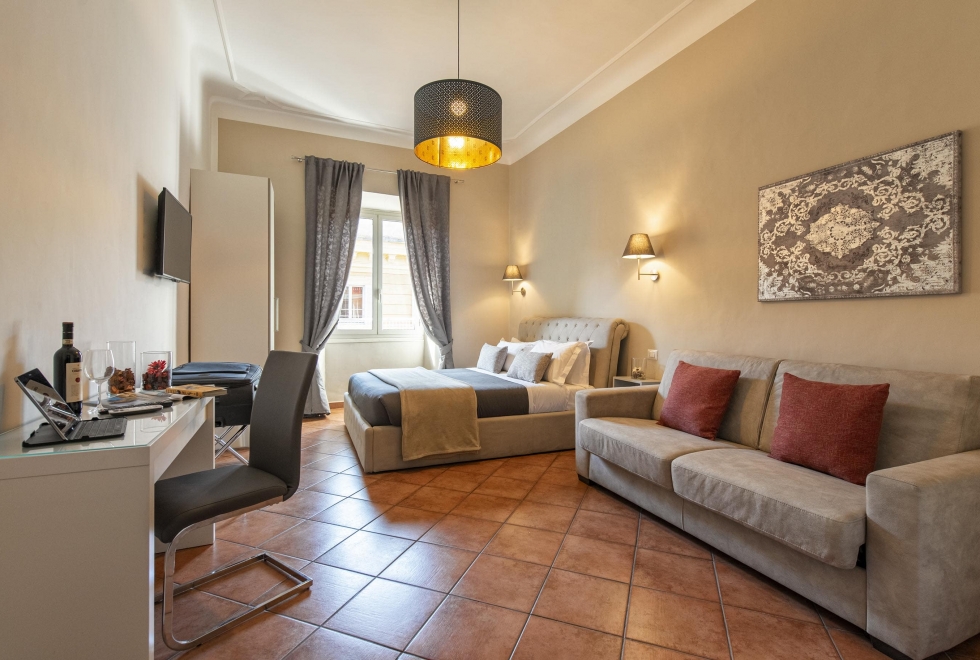 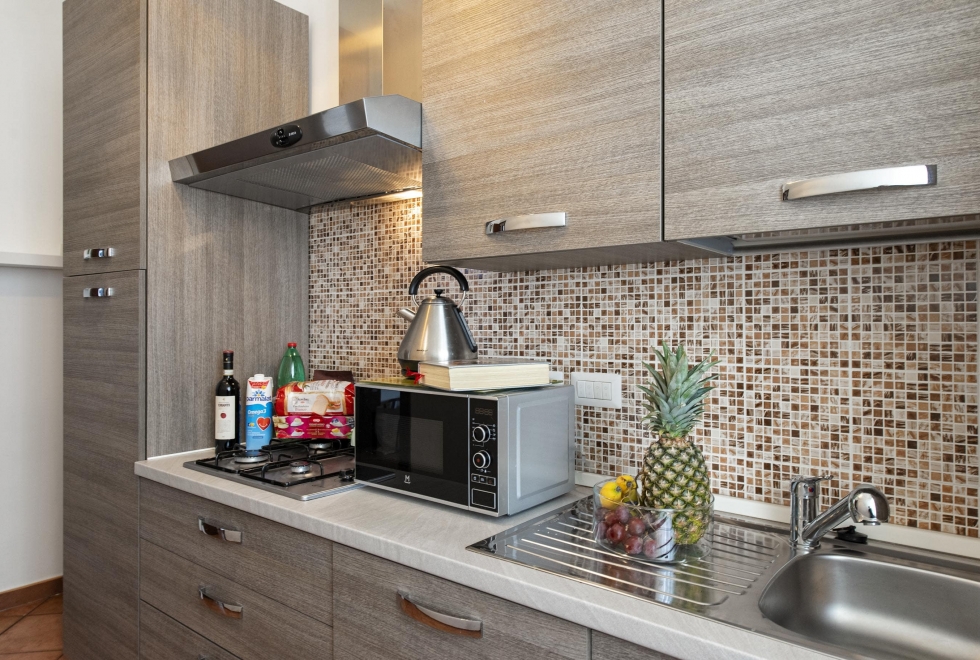 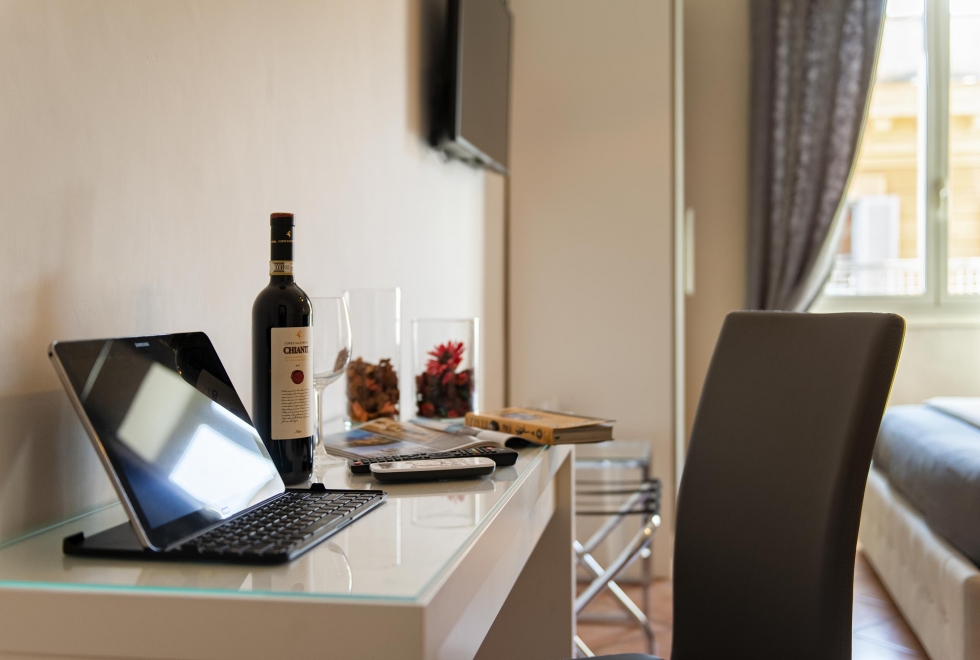 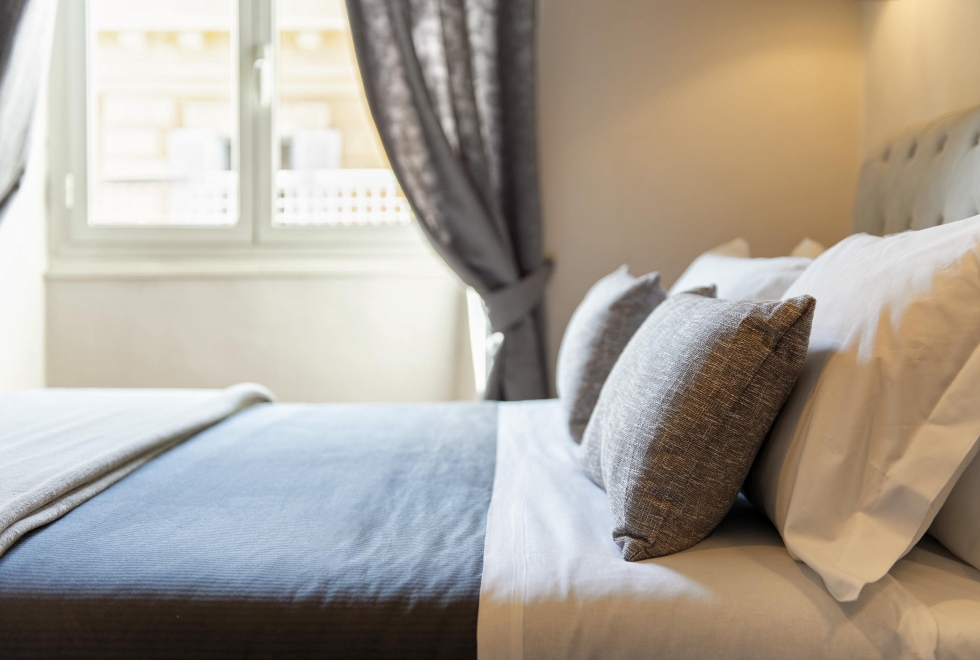 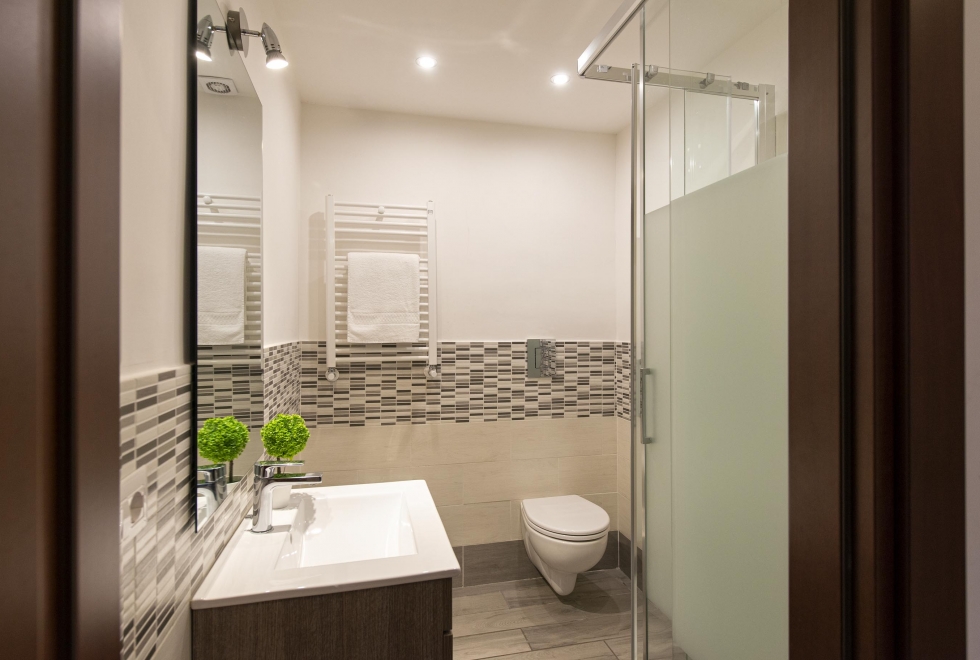 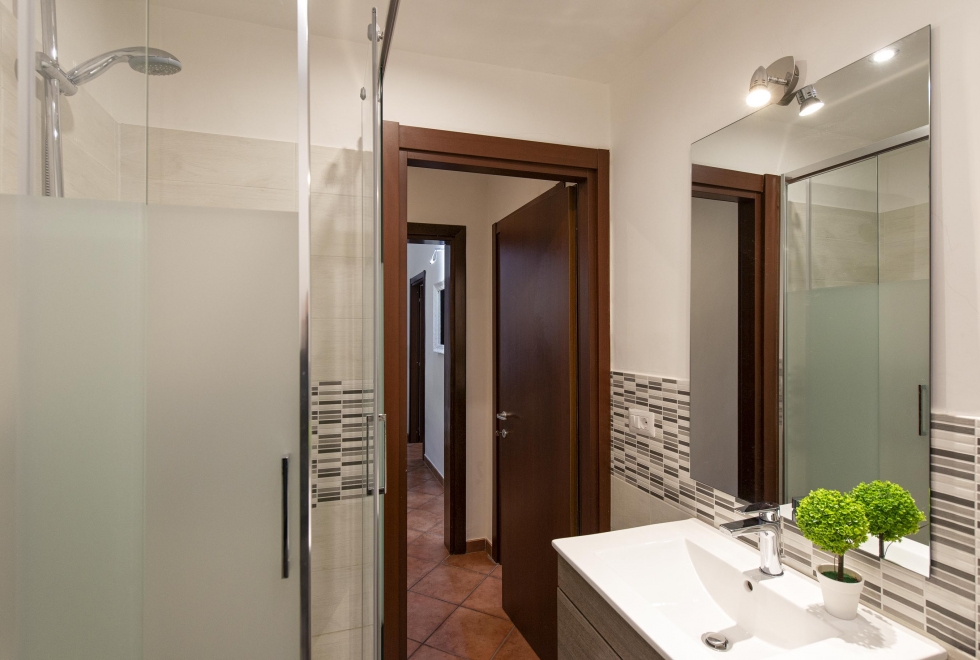 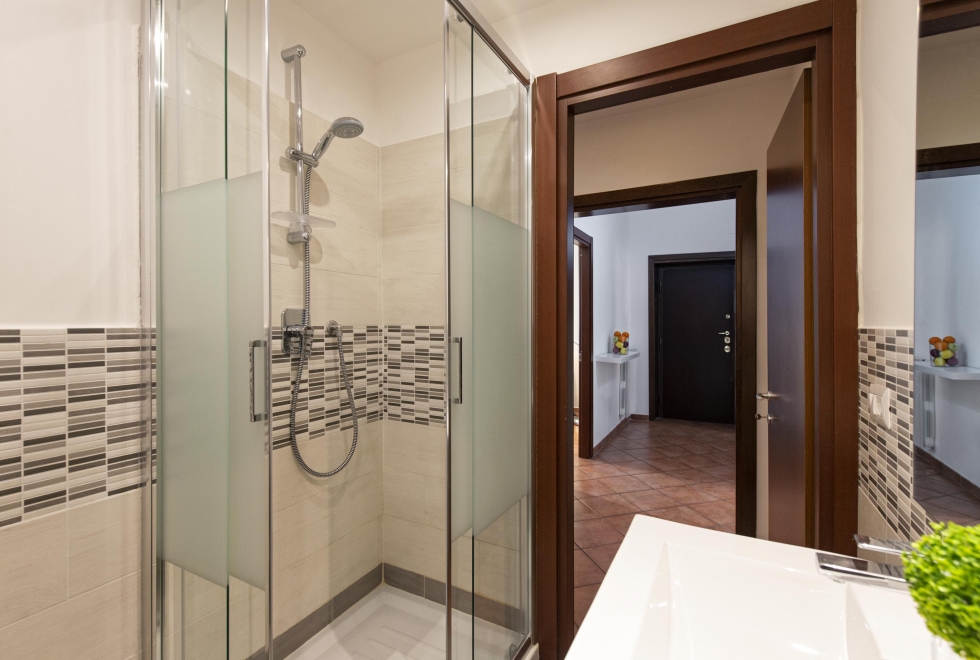 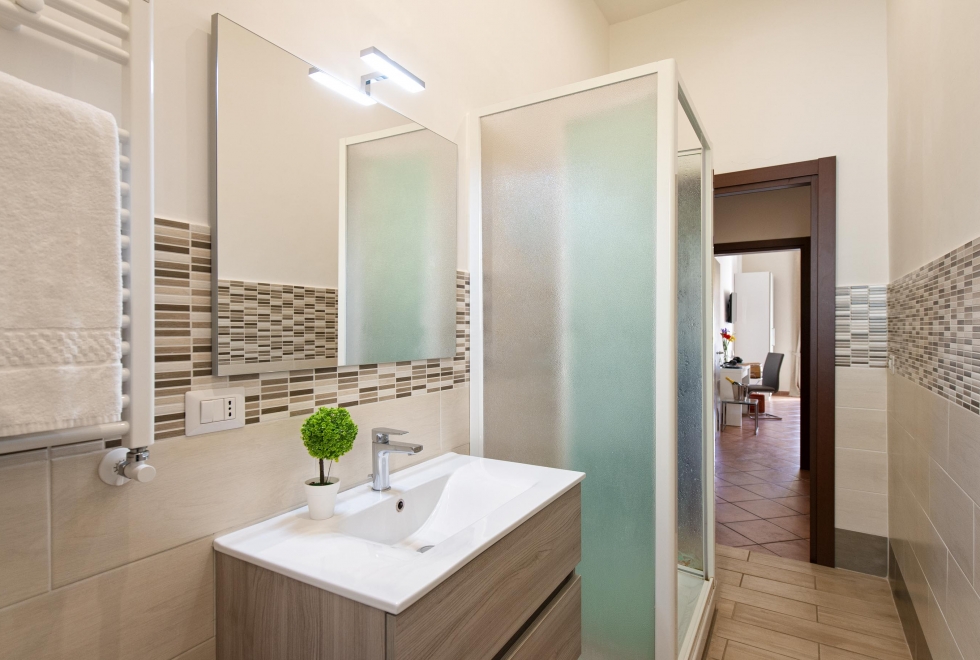 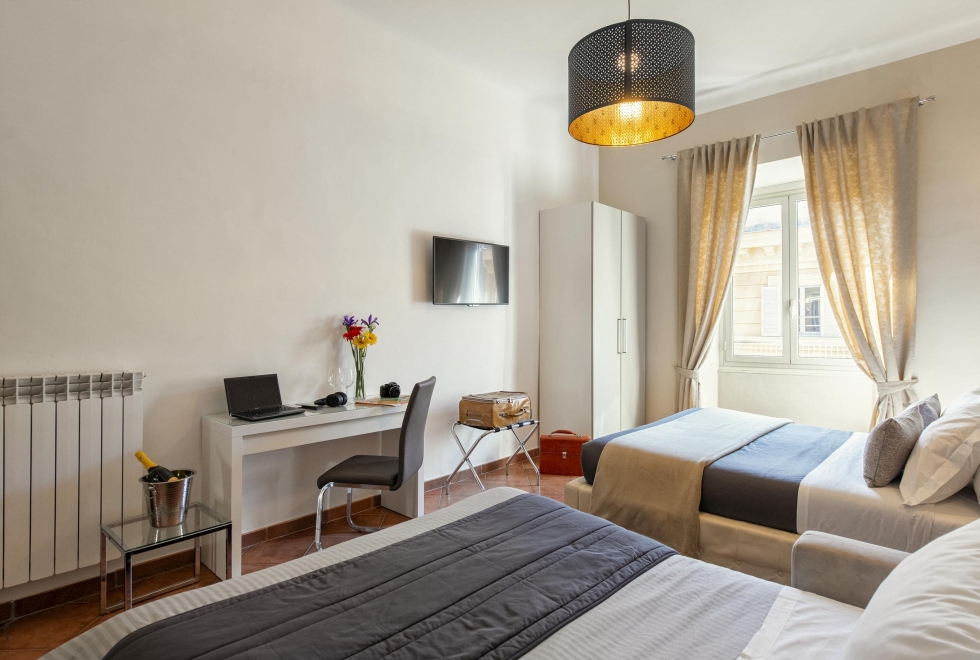 The apartment lies close to Via Veneto, the Trevi Fountain, the Colosseum, the Imperial Forums and Piazza di Spagna, in a fancy and peaceful neighborhood, surrounded by Ministries and Embassies, the best starting point to visit Rome by strolling through its ancient streets, either taking the underground (Repubblica and Termini stops are at a few minutes distance), or moving by bus or taxi.

Termini Railway Station, end line of the Shuttle buses from Fiumicino and Ciampino airports, is at about 15 minutes within walking distance, 10 by bus.

How to reach VENETO PRESTIGE APARTMENT:

TAXI (approximately 10 minutes):
There are always taxis available in front of the main entrance of Termini Railway Station. The route for the apartment lasts about 10 minutes, but it depends on the traffic.

BUS (approximately 10 minutes)
When exiting from the main entrance of Termini Railway Station, take the bus number 910 for 2 stops and get off at the stop “Piemonte-Carducci”.

Walk straight on Via Piemonte towards Via Mario Pagano, then turn right on Via Sallustiana, walking straight on for approximately 150 mt.. Turn on the right and enter Via Quintino Sella and follow the road for about 50 mt. to reach number 49.

Fill out your request

The opinion of who has been our guest Very clean. Owner very approachable and knowledgeable about area. Close proximity to bus transportation to take you to Roman Forum Area and Vatican. Would highly recommend property to any family or couple traveling. We are a family of two adults and four children and it was a great place to share in our Rome memories! The apartment was simply amazing! It was modern, spacious and very clean!! Also, it is located very centrally with restaurants, cafes and shops just around the corner. We had a very nice stay there and felt like home. Thank you also to Gelo for the nice welcome and your help at any request! We will be back for our next stay in Rome :) I liked Location, rooms, bathrooms, kitchenware, beds. Gelo and Kim was so helpful and friendly. We could leave our luggages after check out time and go on our Rome tour. 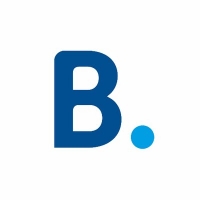 Great location, beautiful clean rooms and right in the center of the main attractions with plenty of places to eat. Lots of room to relax. Wish we had been able to stay more days.

To periodically receive updates, news and offers, subscribe to our newsletter! Enter your email address and proceed with registration.

Why should I book from here?

Only with direct booking we can better meet your needs and offer you the best price.

In addition, you’ll have the right to the benefits below, totally free:

On our official website, you’ll always find the best rate!

Note! This site uses cookies and similar technologies to ensure you get the best experience on our website. If you do not change browser settings, you agree to it. Learn more

I understand and accept