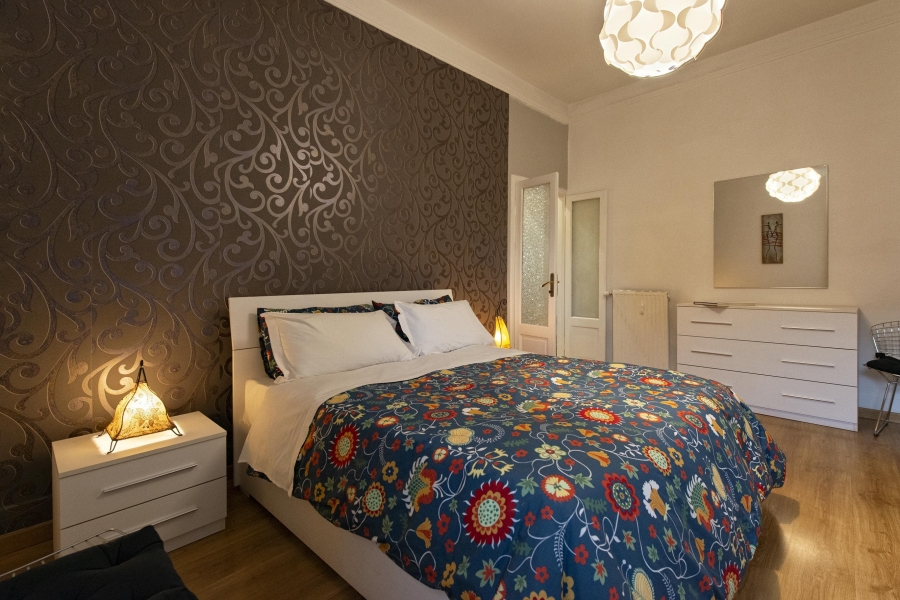 Apartment
Bright and peaceful apartment, with a polished design, placed in the authentic working-class neighborhood of San Lorenzo, known as the student district of Rome, one of the core of roman movida. It is situated at a few steps from the University Sapienza and near to the General Hospital Umberto I.

Designed to host guests and make them feel right at home

Bright and peaceful apartment, with a polished design, placed in the authentic working-class neighborhood of San Lorenzo, known as the student district of Rome, one of the core of roman movida. It is situated at a few steps from the University Sapienza and near to the General Hospital Umberto I.

The apartment consists of 2 bedrooms, each one equipped with a double bed; in one of the rooms there’s also a single sofa bed; the overall capacity is of 4 people.

There’s also a living room with a kitchenette equipped with utensils and accessories and a washing machine. A bathroom with a shower completes the apartment.

The apartment is placed at the fourth and last floor, reason why it is so bright and peaceful, feature not so easy to find in a great metropolis like Rome.

The eccentric entrance from the walkway, albeit through a private modern outdoor lift, leading directly from the public area, evoke the typical features of the “case di ringhiera” (literally, “guard rail houses”), that nowadays can be seen only in the historic centres of Rome and Milan.

This lovely apartment has been designed and furnished to host those guests who choose it for their stay in Rome, making them feel right at home. It’s the ideal place for who, even staying in an apartment totally restored and equipped with all modern comforts, wants to enjoy the experience of living in a 40s and 50s classic and typical building, one of the buildings celebrated in films of great Italian directors such as Federico Fellini (La Dolce Vita) or Dino Risi. Not surprisingly, the district of San Lorenzo has been declared World Heritage of Humanity by the Unesco.

Take a look to pictures broken down into type or category 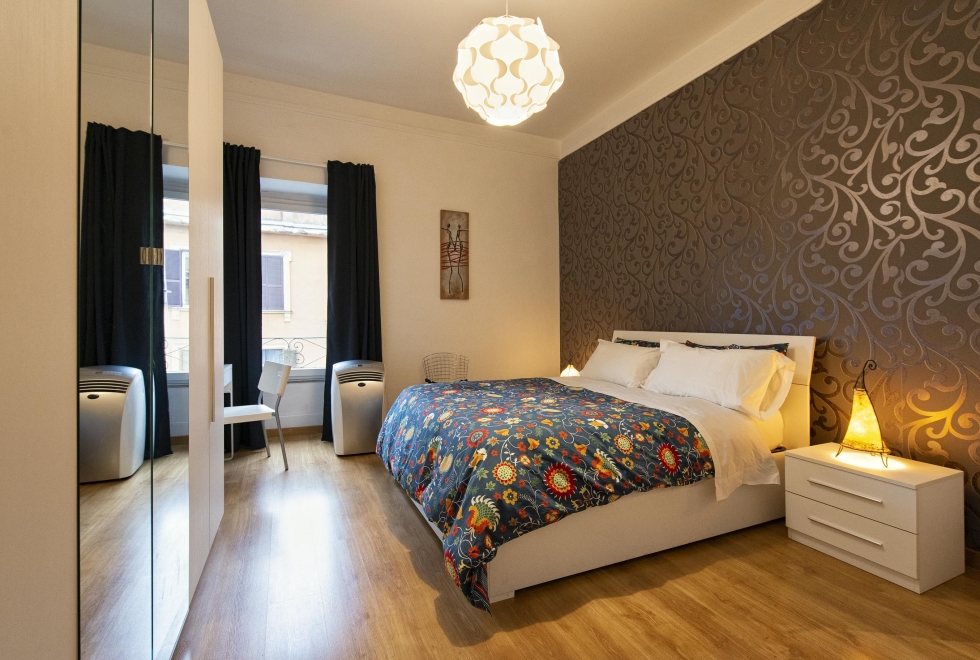 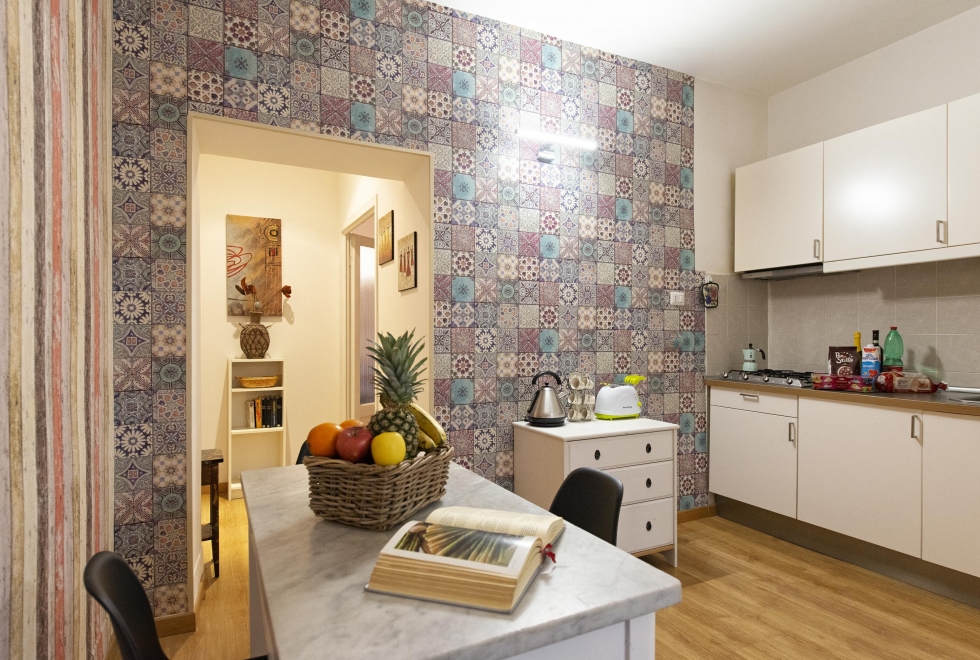 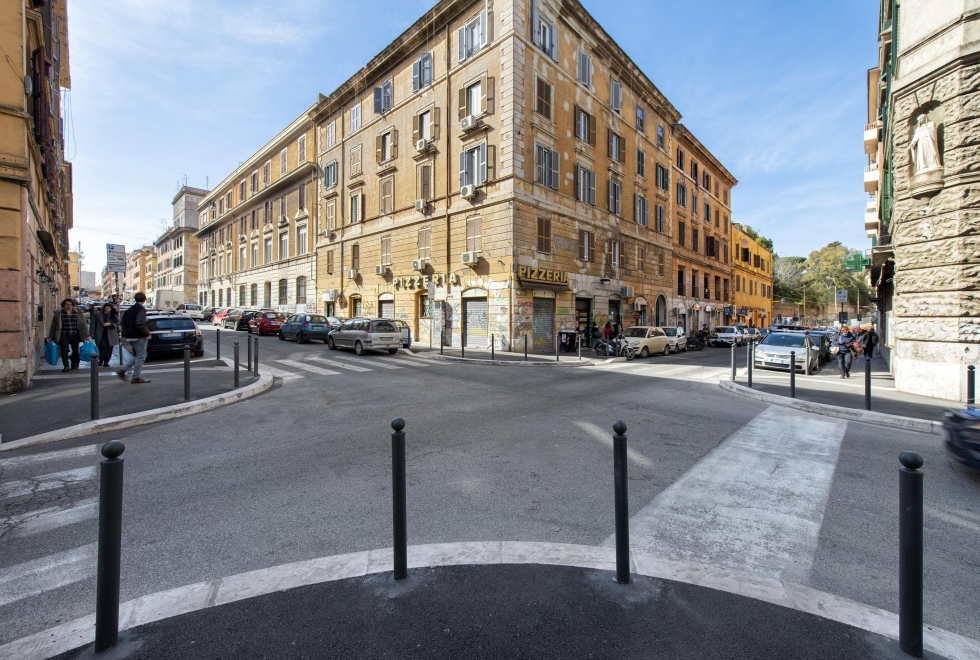 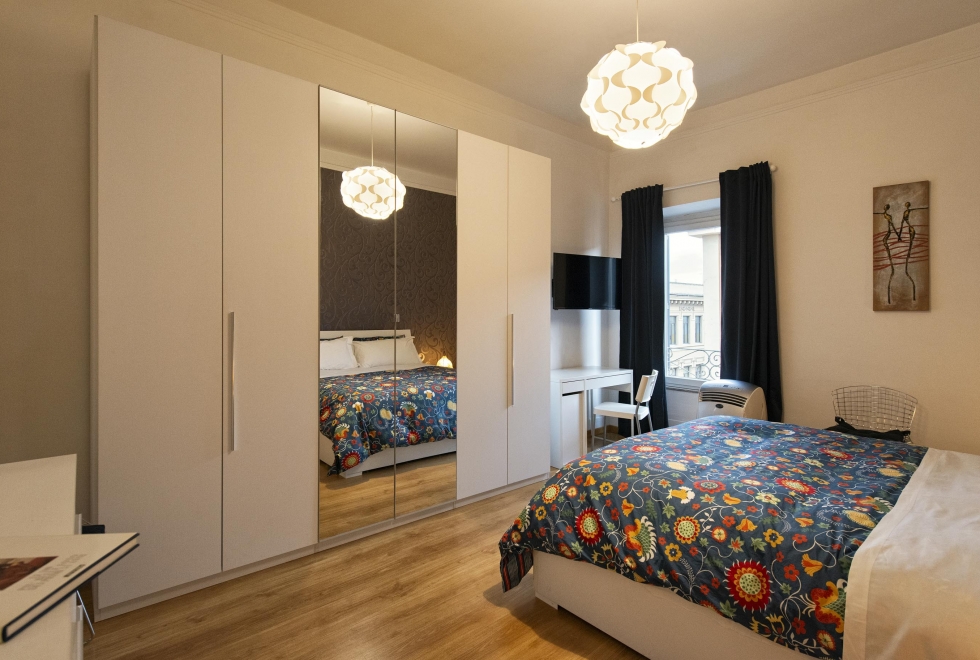 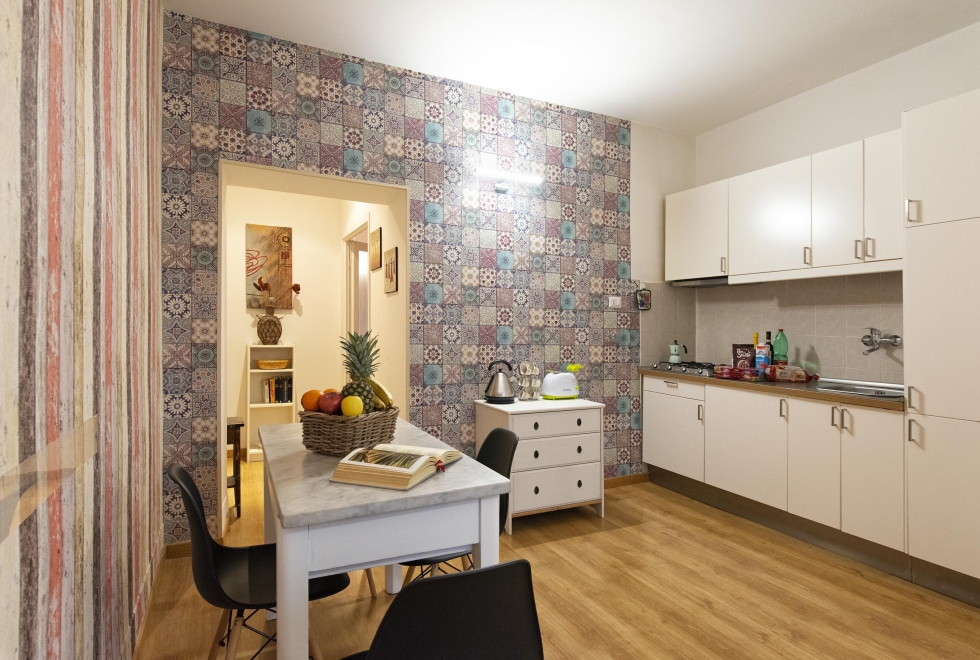 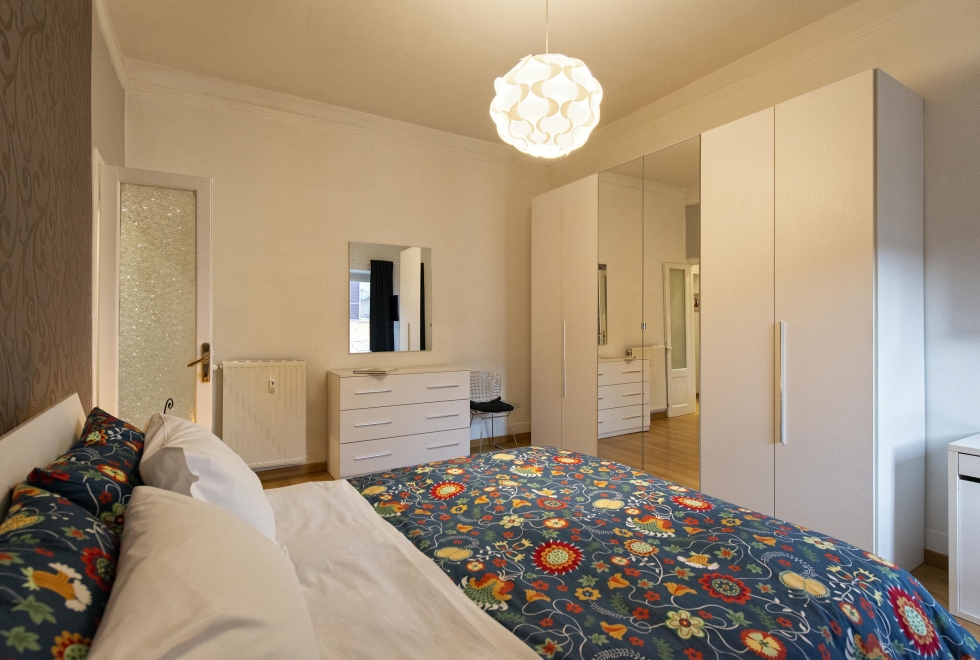 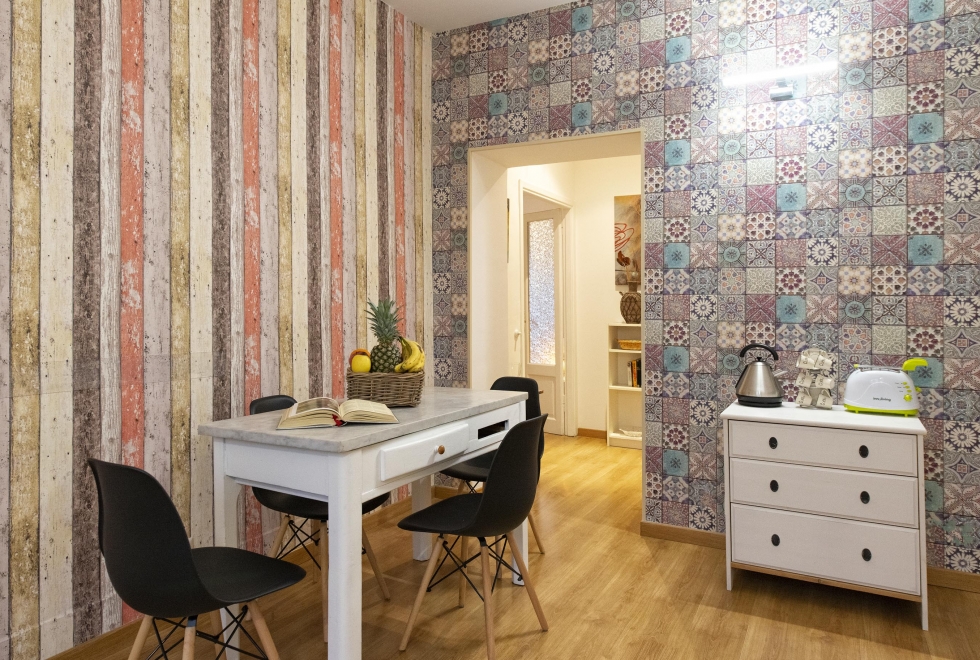 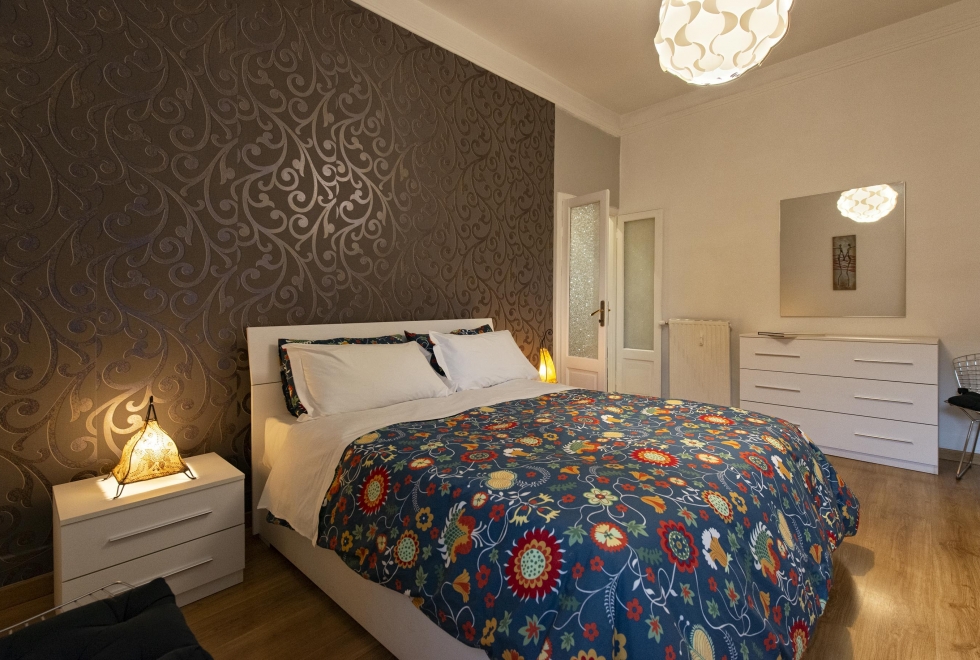 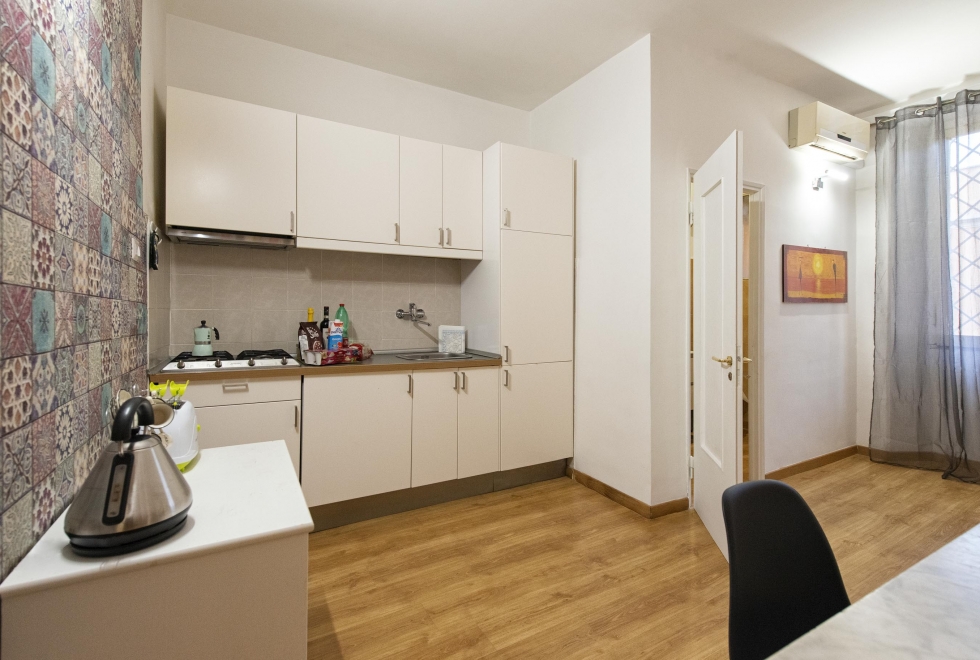 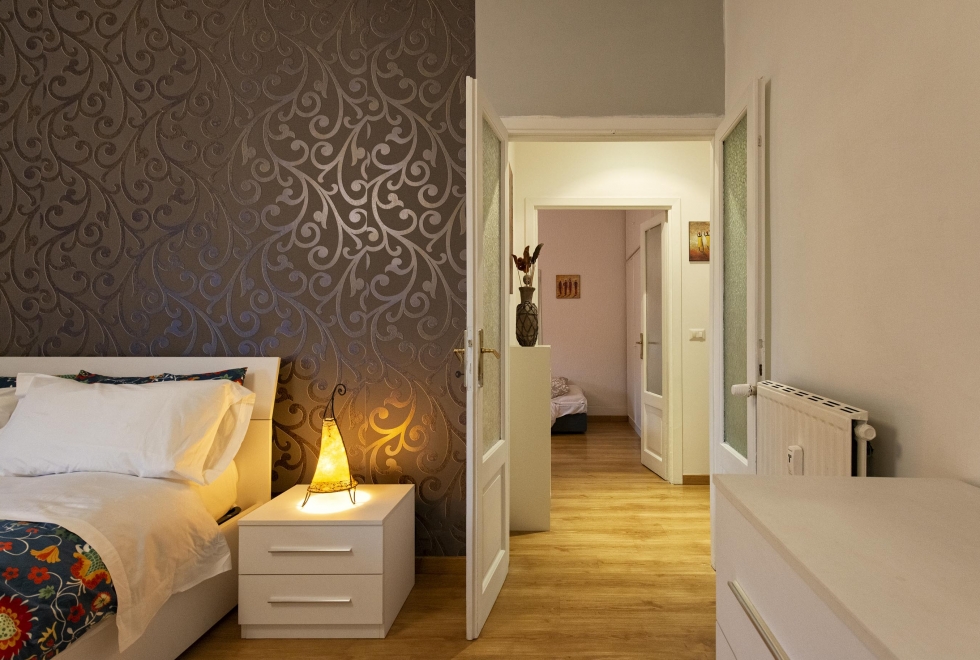 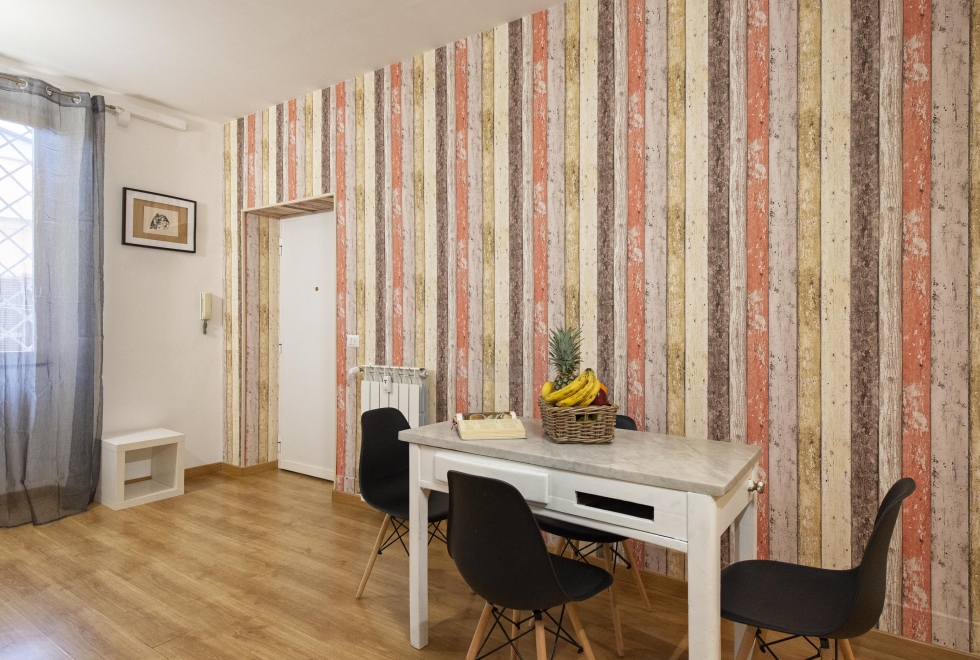 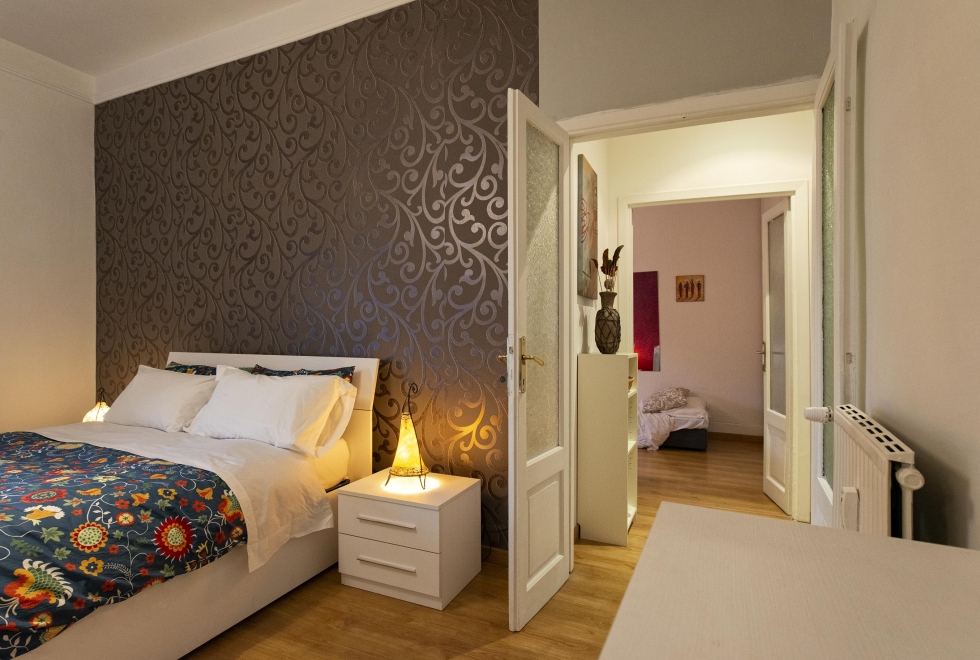 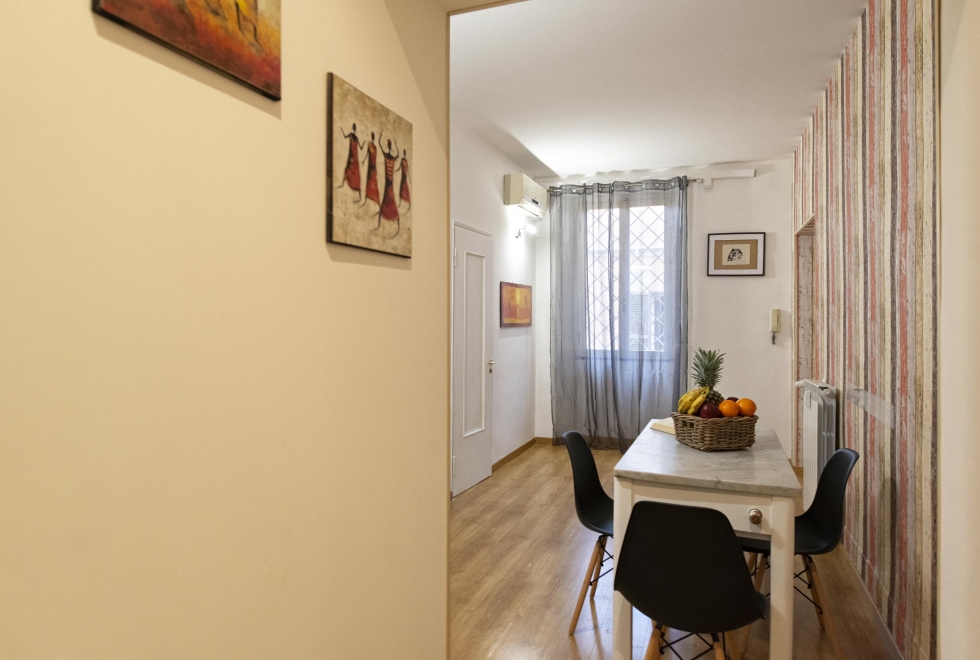 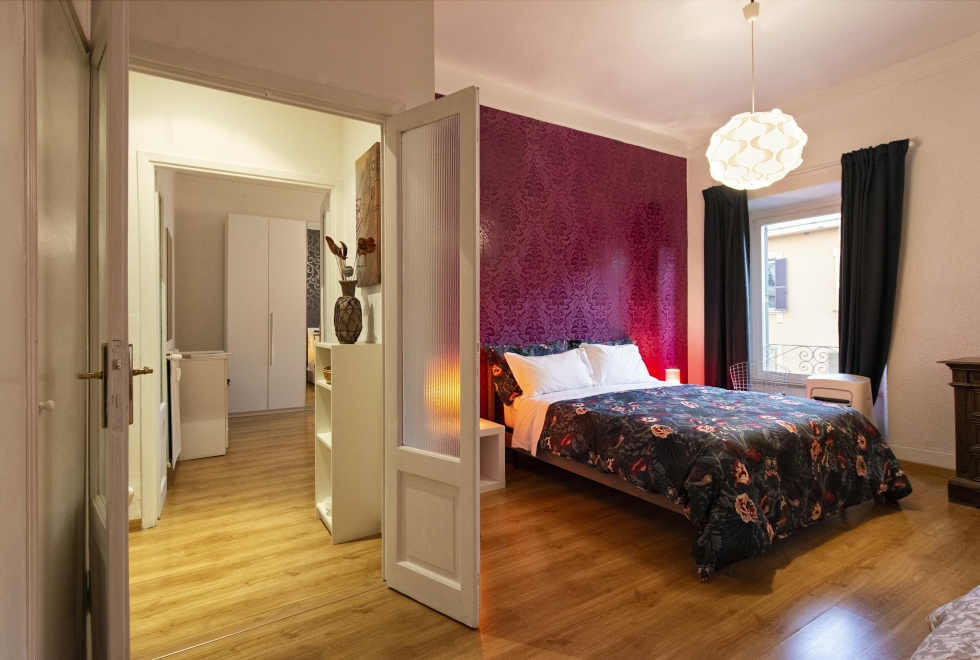 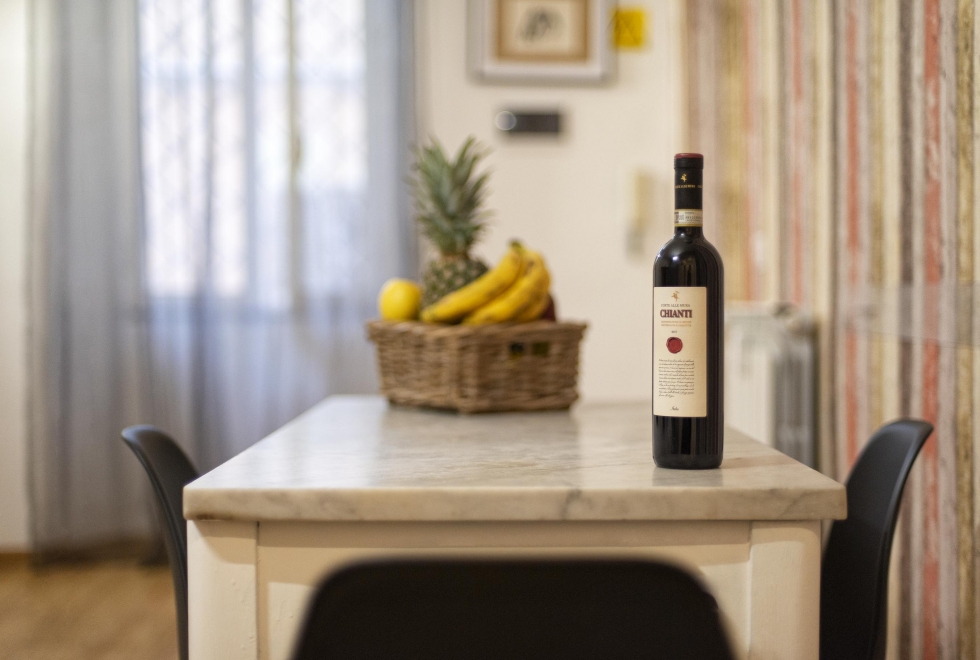 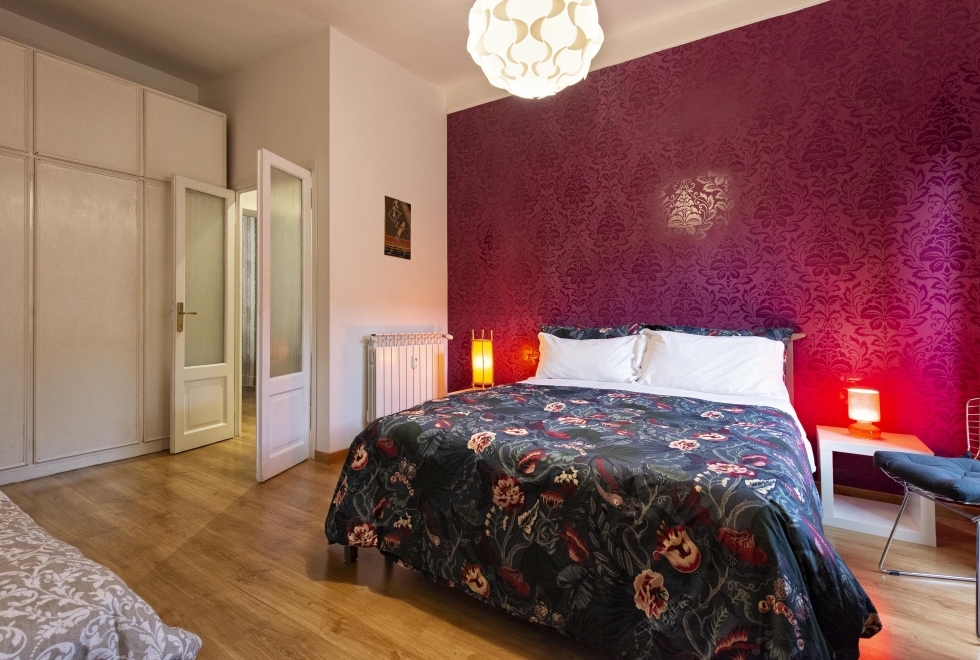 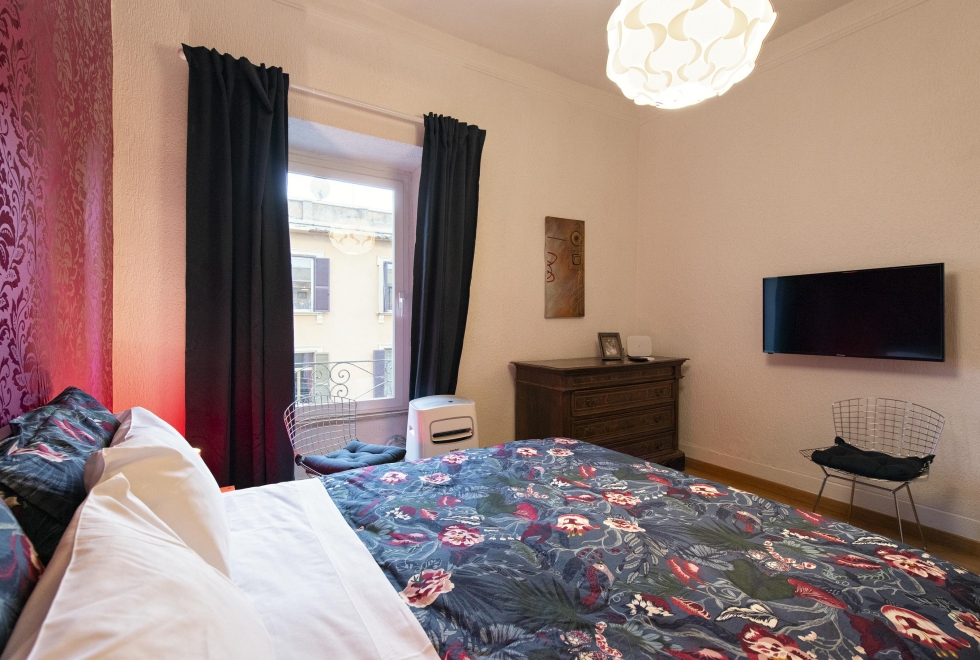 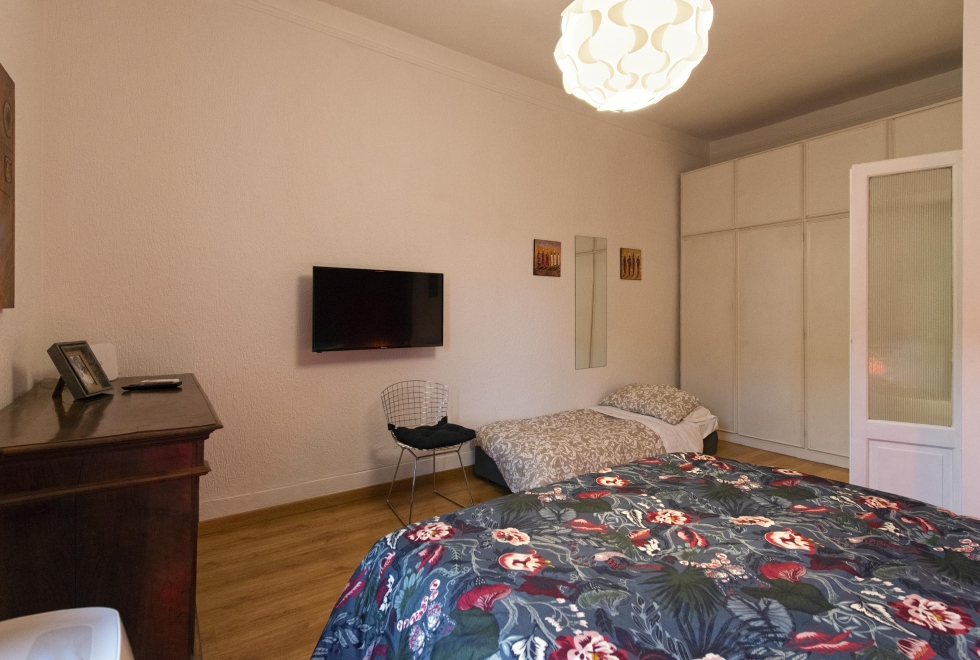 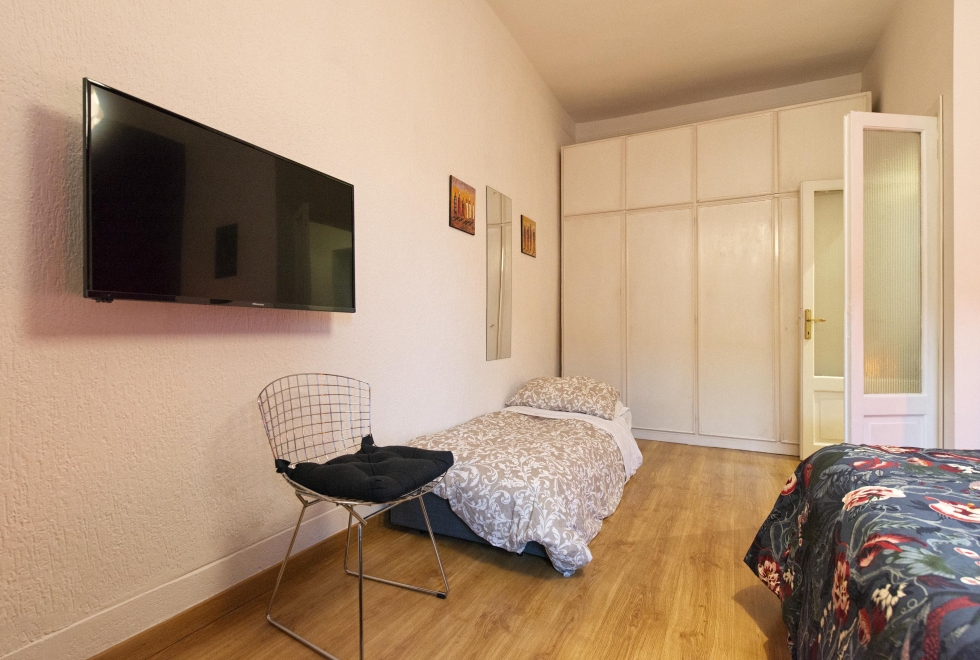 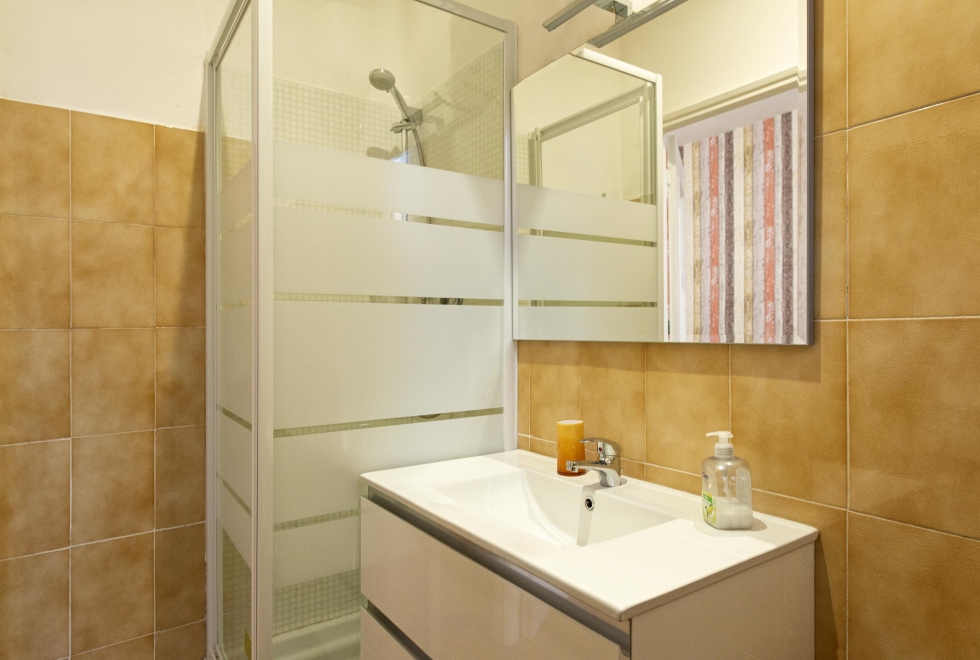 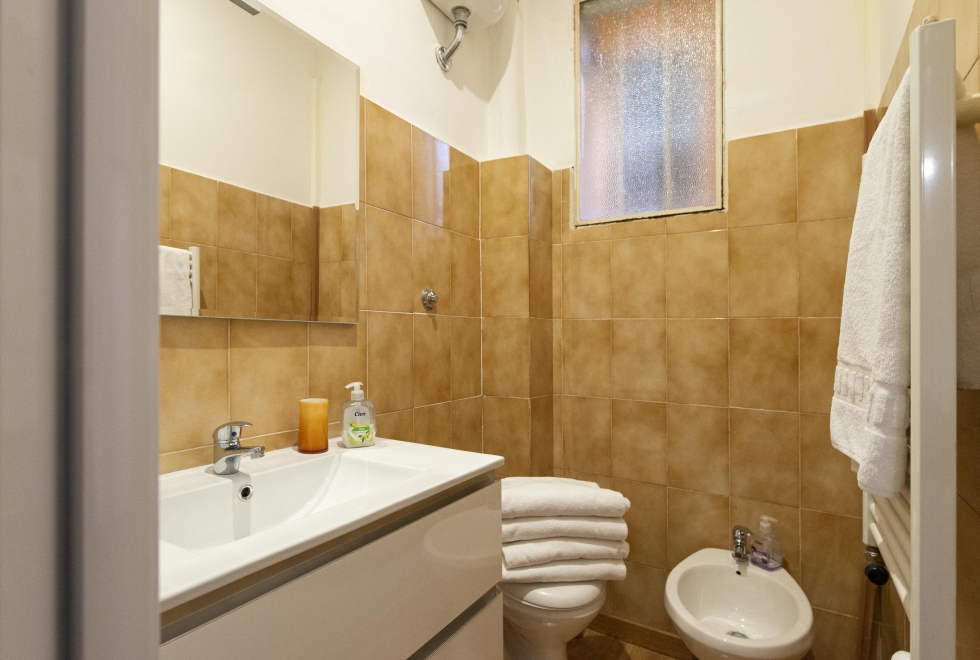 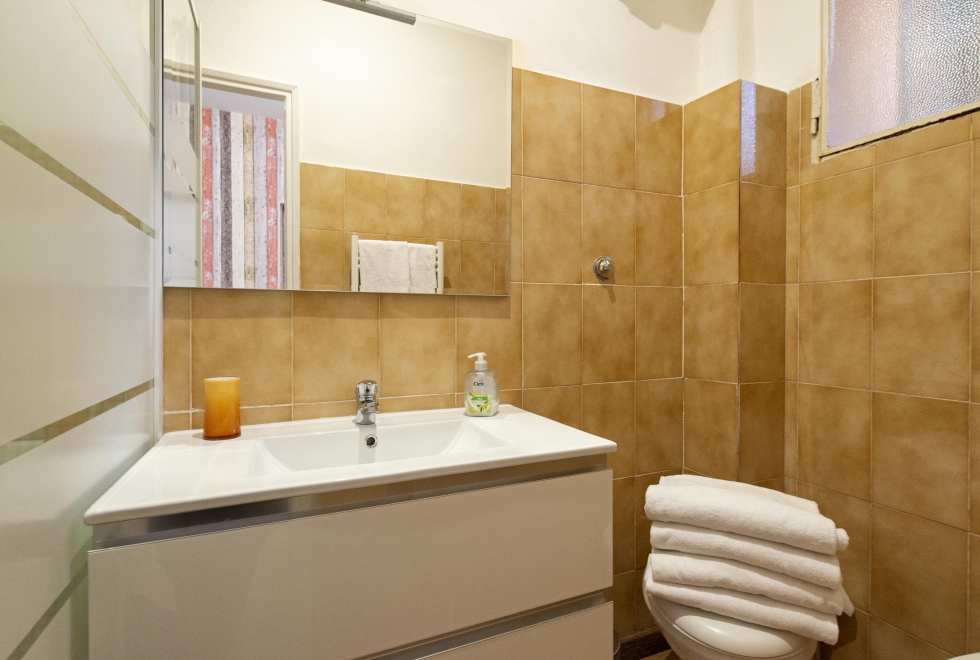 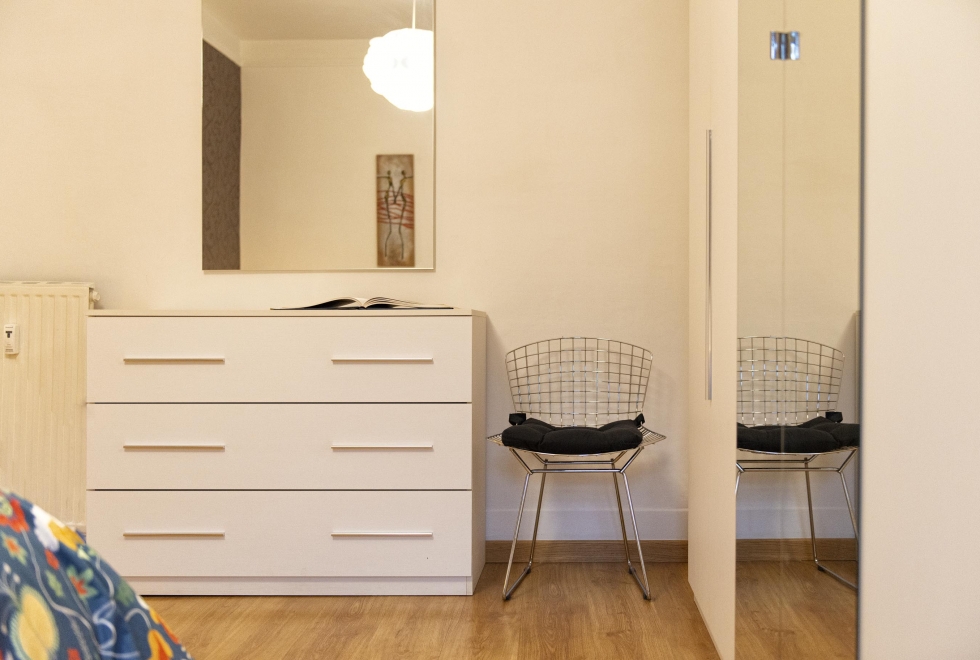 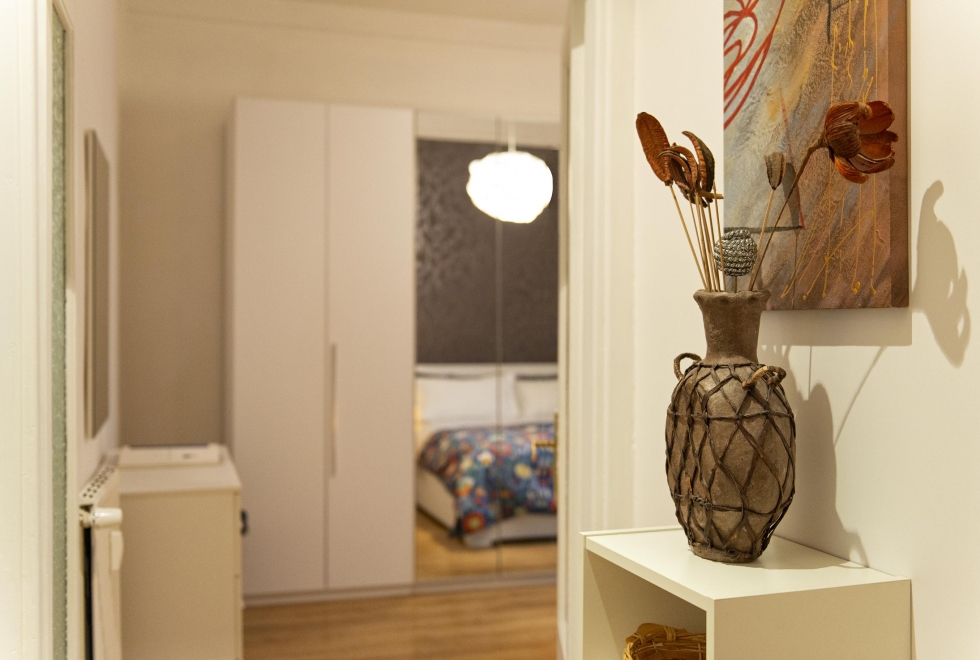 PLACED IN THE QUAINT AND ALTERNATIVE DISTRICT OF SAN LORENZO

The district of San Lorenzo, one of the most authentic districts in Rome, offers plenty of stunning bars and eccentric streets full of stores and supermarkets; full of life, with a vast array of restaurants, well-known for its delicious and cheap pizzerias, it’s famous also for its trendy bars that make it one of the favourite destinations of the roman movida.

Rome La Sapienza Apartment is placed at 5 minutes walking from the University Sapienza and the General Hospital Umberto I. It is very well connected to the historic centre: within approximately 15 minutes walking distance you will reach Termini Railway Station, intersection of the underground lines and the end of line of the Shuttle buses that allow to visit very easily the whole city.

From the bus stop at 2 minutes from the apartment, it is possible to take the bus number 71 that runs every 15 minutes and leads in a few minutes to Termini Railway Station, to the Papal major Basilica of Santa Maria Maggiore, Via Cavour (at a few minutes from the Imperial Forums and the Colosseum), Via Nazionale and, within barely more than 15 minutes, it allows to reach Via del Tritone and Via del Corso (between the Trevi Fountain and Piazza di Spagna and at 10 minutes from Piazza del Pantheon and Piazza Navona).

TAXI (approximately 10 minutes):
There are always taxis available in front of the main entrance of Termini Railway Station. The route for the apartment lasts about 10 minutes, but it depends on the traffic.

BUS (approximately 10 minutes)
Exiting on the left of the Railway Station it is possible to reach, in less than 5 minutes walking (about 450 mt.), the stop “Turati-Fanti” on Via Turati, where stops the bus number 71 which leads in about 10 minutes (4 stops) at the stop “Tiburtina-Marrucini”. At a few steps, once taken Via dei Sardi, after approximately 50 mt. you will find the main door, number 12.

PEDESTRIAN PATHWAY (about 20 minutes walking)
Once exiting Termini Railway Station, we suggest our guests to take the exit on the right that leads to Via Marsala and to follow this street in parallel with the station building for approximately 150 mt.; then turn left on Via del Castro Pretorio and walk for 300 mt.; turn right on Viale Pretoriano for 300 mt.; once arrived at the traffic light, turn left on Via dei Frentani for 300 mt.

At the roundabout, take the second exit to Via dei Marrucini and after approximately 400 mt., cross Via Tiburtina and take Via dei Sardi. About 50 mt. further, there is the main door, number 12.

Below a link to the map that can be useful to print:
https://goo.gl/maps/rf1KhzyJr8D2

Warning:
We strongly recommend our guests not to take the exit on the left of Termini Railway Station which leads to Via Giolitti and where is the stop of Shuttle buses because, even being a very vital area of the city during the whole day, with plenty of ethnic shops, it is lesser recommendable during the night. In addition, even if it’s placed at an equal distance compared with the route/pathway suggested by us, it would force you to pass through the tunnel placed under the station, which is no doubt one of the less charming places in a still beautiful city like Rome.

Fill out your request

To periodically receive updates, news and offers, subscribe to our newsletter! Enter your email address and proceed with registration.

Why should I book from here?

Only with direct booking we can better meet your needs and offer you the best price.

In addition, you’ll have the right to the benefits below, totally free:

On our official website, you’ll always find the best rate!

Note! This site uses cookies and similar technologies to ensure you get the best experience on our website. If you do not change browser settings, you agree to it. Learn more

I understand and accept